The release date of the photo book has been confirmed!
On sale starting June 3rd, 2016
The Photo book “Photosynthesis MIN by Keiichi Tahara”
You can make the international purchase from Super Labo website
Please do not miss the chance to acquire your own copy of this precious photo book. 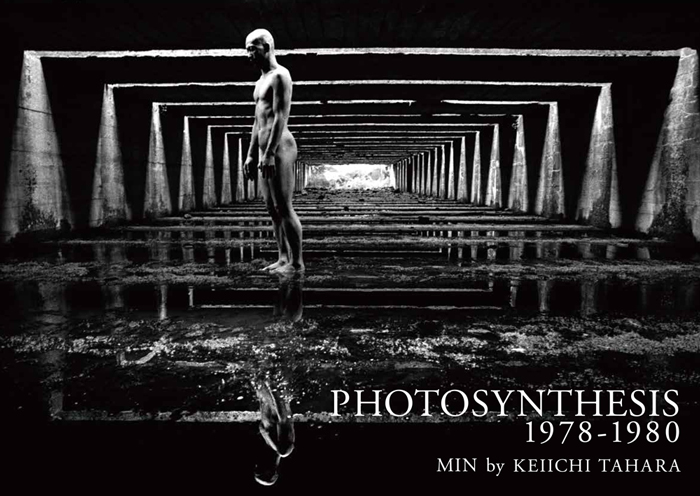 Min Tanaka
Trained in classical ballet and modern dance, Tanaka was active as a modern dancer around 1960s. He then came to be skeptical of the culture and the dance “industry” that were class-bound identity, vis-à-vis post-World War II society. In 1974, he started his own activities, and evolved “hyper-dance,” emphasizing psycho-physical unity of the body. In pursuit for his own dance further more, he distanced himself from the dance market in Japan. However at the same time, his expression activities lead to numerous collaborations with intellectuals and visual artists around the world and forged a major cultural impact on the contemporary art and cultural community at that time. His dance in the very early days will be shown in a photobook by the photographer Keiichi Tahara, for the first time long after over 30 years.

Keiichi Tahara
These photos come from multiple photo sessions I conducted between 1978-1980 with the dancer Min Tanaka, exploring the relationship between physical light and the human body.
This project started at the “MA-Space/Time in Japan” Exhibition which took place at the Paris Autumn Festival in October, 1978. Back then, I had been taking pictures for the “Fenêtre” collection. I was 27 and Min was 33.
How does light affect perception? What about emotions? I was obsessed with these questions at that time. The idea of “Body Weather” brought Min and I together. This depicts the pivotal moment where meditations on physical light met the art form of the human body. The project turned out to be a fascinating three years blurring the lines between the object and subject matter of art.
We experimented with various types of light, ambiences and seasons. The locale was broad, ranging from the metropolitan to the natural; Paris, Rome, New York, Iceland, Bordeaux, Tokyo, Kujuu-Kurihama and Akikawa-Keikoku. The motive was to observe how a dancer’s body adapts to outer stimuli, or to rephrase it: a human body reaching into the light with its raw skin and nerve endings.
In Bordeaux, France lie the remains of a U-boat pen built by the Germans in the Second World War. It resembles an enormous vessel covered with chunks of concrete to assure protection against air attacks. Slivers of light and recollection interweave in this vast unmanned space, where a solitary human body entwines with the light.
In June, the season of the midnight sun, we had been endlessly driving through the geothermal areas of Iceland in search of a good place for a photo shoot. Days bled into nights. The sun never went down. The glistening black ground and intense tranquility enclosed on us. The camera clicking and rewinding film were the only sounds accompanying our steps.
Although this work has been nearly abandoned for the past 35 years, today it holds special meaning to the both of us in revisiting our creative starting points.